August Audiobook News from Your Friend and Humble Narrator

It's been a busy summer for your droog Paul Woodson. Here's a roundup of recent audiobook endeavours.

I'm excited to be in the great company of Deyan Audio! More news on this as I learn more myself.

I'm pleased to announce the recent release of the audiobook of Rashad Freeman's NIGHT SLASHERS. I've done a few mysteries, but none quite so gritty as this. A New Orleans plastic surgeon's life is in uproar when people around him keep being murdered. Whodunit? His business partner? His grizzled old Army buddy? Or even the surgeon himself, during a number of blackouts that are peppered with flashbacks of his service in Vietnam? You'll have to listen to find out!

A Bridge Through Time by Jennae Vale–
Production Complete; Available Soon on Audiobook

It was a pleasure to narrate the first book in Vale's THISTLE AND HIVE Series. Featuring a pastiche of English, Scottish, and American accents, this delightful Romance novel juxtaposes a modern American woman and a medieval Highland Laird! Of course it's love at first sight, with a smattering of time travel, adventure, and humour! This was a favourite of mine to narrate, and I think it will be one of yours, too– if you enjoy manly, burly Scots sweeping lassies out of their ghillies. Och aye! 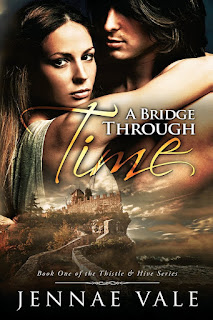 The audiobook is not yet released; but in the meantime enjoy this preview clip on SoundCloud!

Purchase the e-book on Amazon here.

Engaged to Narrate and Produce Keira Montclair's
Brightest Star in the Highlands!

I'm very happy to begin pre-production on an audiobook by bestselling Highland Romance author Keira Montclair, THE BRIGHTEST STAR IN THE HIGHLANDS! The author herself selected me to narrate this next book in her Clan Grant Series. I'm eager to begin this new arrangement and add to my repertoire of rugged Scottish heroes and intrepid Highland heroines! Watch for it in a couple of months! In the meantime, read (or listen to) the first six books in the series (not narrated by me, FYI). 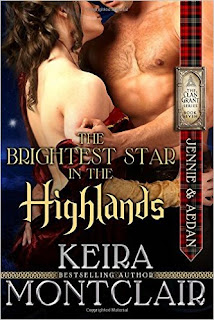