And on the Auschwitz front, thank God the Russians were victorious and all, but the crimes, rapes, murders, etc. that they committed essentially as revenge against the Nazis when the tide turned, are just as horrific. Madness was at its full tilt at that time.By comparison, the Western Front was almost a "gentleman's war". I think the main reason we don't see more films or stories about the Eastern Front is that it's too freaking horrific.
This is a bit of a rambly blog post; sorry about that. Just some jumbled thoughts on this frozen night in New York, after the Blizzard That Wasn't (Here).

Posted by Paul Woodson at 5:59 AM No comments: 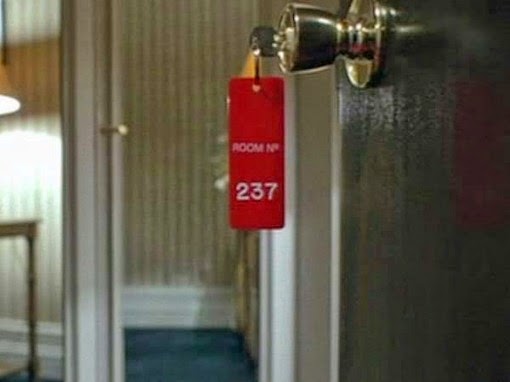 Honestly, I didn't expect the documentary ROOM 237 to be so nutty.

Man, I thought *I* read too much into films sometimes, but some of these theories about what Stanley Kubrick really MEANT to convey via his film of Stephen King's THE SHINING have me scratching my head and thinking, "Oof. Get a life."

It's still pretty amusing as a way to re-visit the masterpiece, but a better way to do that is just to watch the original and draw your own conclusions. It's one thing to argue for potential symbolic interpretations of a work of art, but another to conclude that this is what Kubrick "Obviously MEANT", whether it's arguing that he was apologizing for faking the Moon Landing, or that the Hotel Manager was purposely framed (with a paper tray, for about 1/4 of a second) to look like he had a boner pointing at Jack Nicholson.

A good example: One theorizer points out that the room key for Room 237 shows only the capital letters R, O, O, M, and N. "And the only words you can make from those letters are Moon and Room. He's referring to the 'Moon Room' where the Apollo landing was faked." 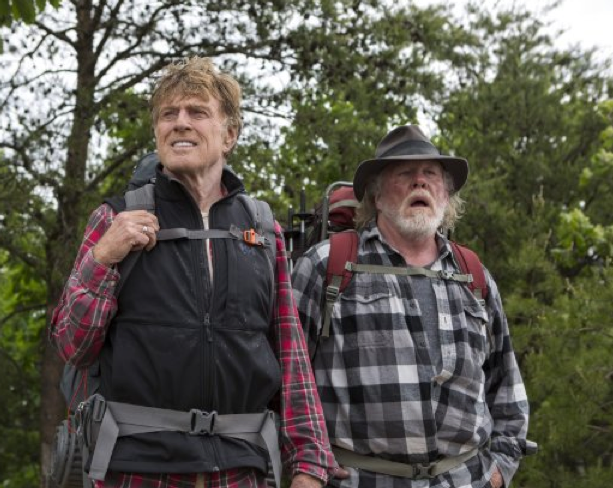 A WALK IN THE WOODS, the film, is coming, but how will it depict the Appalachian Trail, and Bryson's memoir of his own experience? My 2¢ has always been that Redford & Nolte are too old for the parts, but I'm willing to reserve judgment until I've seen it. Many of you probably know I've put in 700-odd miles on the AT myself over the years.Redford has always been great, and single-handedly carried ALL IS LOST last year. But for AT and WITW aficionados, changing the age of the protagonists from their 40s to their 70s fundamentally changes the narrative. (When I first read it, I was in my early 30s, but now I am basically the age of the protagonists in the book.)There are plenty of retirees hiking the AT (after early 20s, they are the 2nd highest demographic), but that's a different tale than that of the guys just realizing, by virtue of an attempt at an Herculean physical feat like thru-hiking the AT, that they are no longer freewheeling, robust young men, but early-middle-aged guys somewhat out of their depth. When you hike the AT in your 60s or 70s, you've already come to grips with that. It must fundamentally be a different story. And yet, I'm still intrigued. Downside: after its release, the AT will get a WHOLE lot of overuse again. Come to think of it, late 30s-early 40s may be the loneliest AT group. In my recent section hikes, there have been very few men, and ZERO women, that I've encountered in my own demographic.
Posted by Paul Woodson at 6:46 PM No comments:


While Fairy Tales are on my mind (thanks, INTO THE WOODS), allow me to recommend the daringly confusing, yet fascinating British film, THE COMPANY OF WOLVES, from 1984, which comes at the Little Red Riding Hood tale from about 5 different angles, using multiple narratives-within-a-dream and stories within stories to accomplish that daunting task.

The linked review provides good insight into the movie's background. All the different allegories and symbolisms of Little Red are in this film somewhere, and Sarah Patterson does a marvelous turn as the flowering girl on the cusp of teenhood who is both enchanted and repulsed by "wolves".

http://www.cutprintfilm.com/features/the-company-of-wolves/
Posted by Paul Woodson at 7:45 PM No comments: