I was far too young to understand or appreciate Alex Haley's ROOTS as a child. Even when I remember my Mom watching in the early 80s, as I flitted in & out of the room occasionally taking a morbid interest, asking what thumbscrews were– that was almost certainly a re-airing. But tonight, with the Holiday weekend upon us and the apartment to myself, I've begun watching.

Though it moves slowly, and I've had to acclimate myself to 1970s US TV standards, the sheer humanity of its story outweighs any occasional lapses in production value tenfold. It didn't take me too long to realize that I was watching a masterpiece. 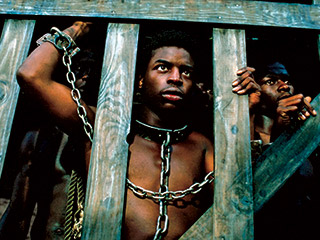 After finishing, I agreed with a friend who said each episode "ripped his heart out of his chest" – it ripped my heart out too– there was always a familiar pattern of happiness followed by disappointment followed by tragedy, which then repeated.
I really liked the complexity of the characters; nobody was a heroic or villainous stereotype, but as in real life, everything was much more multifaceted and gray. Obvious metaphor ("It wasn't just black and white") is obvious. Not all the white characters are horrible; not all the black ones are admirable. There's even an interesting subplot involving a white couple who become like family to the black characters, both pre-and post-Emancipation.

In so many other films about slavery, we always hear from the anti-slavery side – Abolitionists, Abraham Lincoln, Frederick Douglass, Thaddeus Stevens, etc. There is always a feeling of hope, of possible escape, because somewhere else, we know people are fighting to end this great Wrong. But in ROOTS, we experience only the world of the enslaved, and the most we see of such faraway grand pipe dreams are whispered tales and rumors. The North may as well be as far and unreachable as Africa.

So many great actors - baby Levar Burton and John Amos as Young & Old Kunta Kinte, Leslie Uggams, Ben Vereen, not to mention a detestable Lloyd Bridges, a queasy Ed Asner (as the grudging captain of a slave ship), and OMG, Robert Reed– that's right, Mike Brady of THE BRADY BUNCH!– as a wealthy slave owner!
This should be required viewing for all Americans, black, white, and brown. White folks especially need to watch it, as I worry that there's a lot of historical ignorance going around. ROOTS makes the struggles (and joys) of black Americans relatable to all people. Even today as we celebrate our great nation's inception, we should not forget the sins of its past.
Learn and Advance is the rule. We must always Learn and Advance.
Highly recommended. Rating: A.
Posted by Paul Woodson at 10:48 PM