It's been a busy and crazy May! This month, I:

• completed my longest single audio title to date, THE NIGHTFALL DUOLOGY by Mickey Zucker Reichert (Official) , for HighBridge Audio​, a great fantasy adventure which clocked in at 37.1 FH! 😮

(In addition, it was entirely in UK accents at the publisher's request, including the base narration, which is like a second skin to me, but still requires concentration so as not to get schizophrenic.)

• attended the final Romantic Times Convention (RT Booklovers Convention) in Reno with a group of fabulous narrators from the Romance Narrators group! Several authors I've narrated for were also in attendance. I spoke on 2 panels, including what I think was our best-attended, "Men in Audiobooks", although perhaps that was due more to anticipation of bare-chested cover models, who were not in attendance. 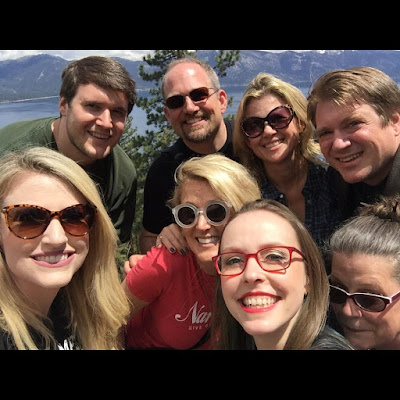 • turned the RT Reno into an opportunity for a much-needed outdoor vacation! Flew into Phoenix, then hit Sedona, Walnut Canyon, Sunset Crater, the Grand Canyon (2.5 days), Las Vegas (where my brother Ben Stickel now works as a sound technician for one of the hotels), Death Valley, Lake Tahoe, and of course the Peppermill Resort Spa Casino in Reno, where RT was happening. It was glorious.

• saw the release of my 1st narration of a Pulitzer Prize Finalist, RAILROADED by Richard White, for Tantor Audio!

• had my first in-person audition for Audible! It was several years in the making, but I finally got there!

:) I think it went swimmingly, but still—fingers crossed.

• get to finish out the month with #APAC2018 and many wonderful narrators! Can't wait to reconnect with you all.
Posted by Paul Woodson at 12:22 PM