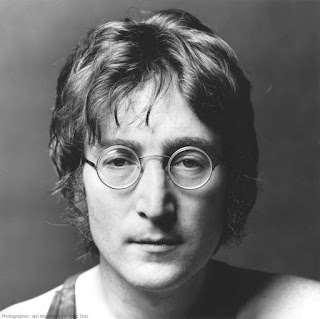 My 2nd residence in Manhattan was the same block as the Dakota. (I'm still not sure how I got such a great deal on W. 72nd St. to be able to afford it.) Every time I walked up the street to Central Park I thought about him, and all the history there. And every 8 December, there were always many acolytes both at the Dakota Apartments, and the "Imagine" Memorial just east, inside Central Park.
My parents were massive Beatles fans and I know that my birth name was at least partly influenced by Paul McCartney. John Lennon, though, was the strongest id of the group. He had such an amazing life journey, not just the fame and fortune of it all, but his transformation from a frustrated, pent-up, almost criminal youth to a peace-and-love, universalist embracing philosophy. What a cultural touchstone he was. And what a tragic waste. 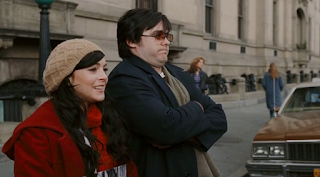 Mark Chapman was an addled excuse for a human being, but he was portrayed with intriguing commitment (seriously, with the weight gain he is unrecognisable) by Jared Leto in the sleeper CHAPTER 27 (2007), which follows Chapman's time in NYC leading up to his assassination of John Lennon. He's not glamourized or sympathised at all, and it's sad because you know how it's all going to end, but it does put you into an interesting time and place, and the supporting cast (generally all playing Lennon fans – Lindsay Lohan, reminding us that she CAN be a really good actress– or paparazzi– Judah Friedlander of 30 ROCK fame– that Chapman interacted with) are all phenomenal.
Posted by Paul Woodson at 2:45 PM